Our last decent rainfall event was in mid-September 2013 at 36 mm; so things here on Ochre Arch are ‘crisp’ and the long term forecast suggests little rain until autumn or beyond.

The quality of our bore water supply is first class, both in terms of mineralisation (or lack of it) and lack of impurities (zero chance of hose fitting blockages). The marginal supply cost is low at around $0.50 per kilolitre and marginal on-farm pumping cost is next to zero provided we don’t need to draw on the back-up diesel generator i.e. power source is from our solar and wind turbine sources. We are not stocked to capacity and thus are not using our full daily bore water scheme supply allocation.

It’s been a while since we kicked off a new on-farm experiment. They are one of the best ways to learn.

We've installed a high flow water sprinkler well out from fence-lines in the Airstrip Paddock and will observe vegetation change over time from the soil (under the range of the sprinkler) being kept constantly damp from regular evening watering events using our surplus water scheme supply.


The photo below shows the soil surface condition at the site. 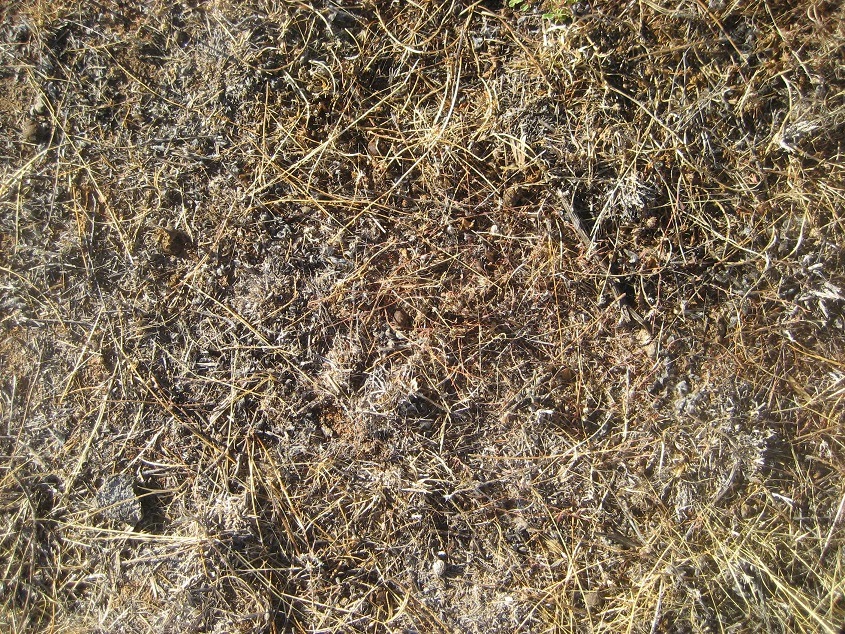 We recently purchased the following parts and assembled a water sprinkler (parts listed from the ‘top down’ in terms of the final assembly):


Here's a photo of the brass nozzle on the top of the riser. 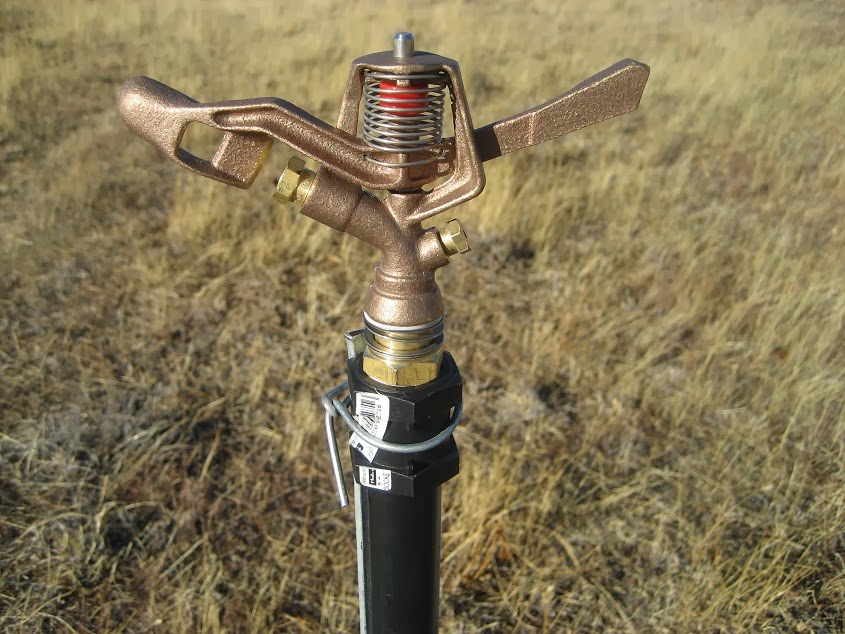 When the assembly was complete we attached it to a hose near the house connected to the bore water supply hydrant. The spray nozzle was placed in an empty 20 litre bucket and the hose turned on full pressure. We timed to see how long it took to fill the bucket with water. The pressure was such that initially water flowed out of the bucket. After things settled we calculated bucket fill time at 25 seconds giving a flow rate of 0.8 litres per second.

Our initial thinking was that we’d run the sprinkler in the paddock long enough to disperse 1,000 litres. Based on the above figures this would take a tad over 20 minutes.

We chose to set the sprinkler up in the Airstrip Paddock with water sourced from the hydrant on the fence between the holding yard for both our sheep and cattle yards and the Airstrip Paddock. Site location factors included being within close proximity to the house (we can see the site from under the covered area to the east of the house), on pasture that has been reasonably heavily grazed and in a paddock that we set stock with both pet sheep and our rams. Whatever grows will be a good source of protein for these livestock through to the end of summer.

Using one of our 18 mm hoses as the connector and distance setter we selected a spot equidistant from two fence-lines such that it would not be possible for the water to land on fence-lines i.e. all growth will be within the Airstrip Paddock. In the interest of simplicity a shortened star post was hit into the ground at the desired location and the new assembly attached.

Here's a photo of the riser in place, with the nozzle on top. Using two panels of weldmesh we constructed and put in place under the estimated drip line a circular fenced area. The diameter is approximately 3.6 metres giving an area of approximately 10.2 square metres. Having this in place will allow us to observe vegetation growth without the sheep having access, although other herbivores such as kangaroos and rabbits may gain access.

The photo below shows the stock exclusion area with the sprinkler 'doing its thing'. 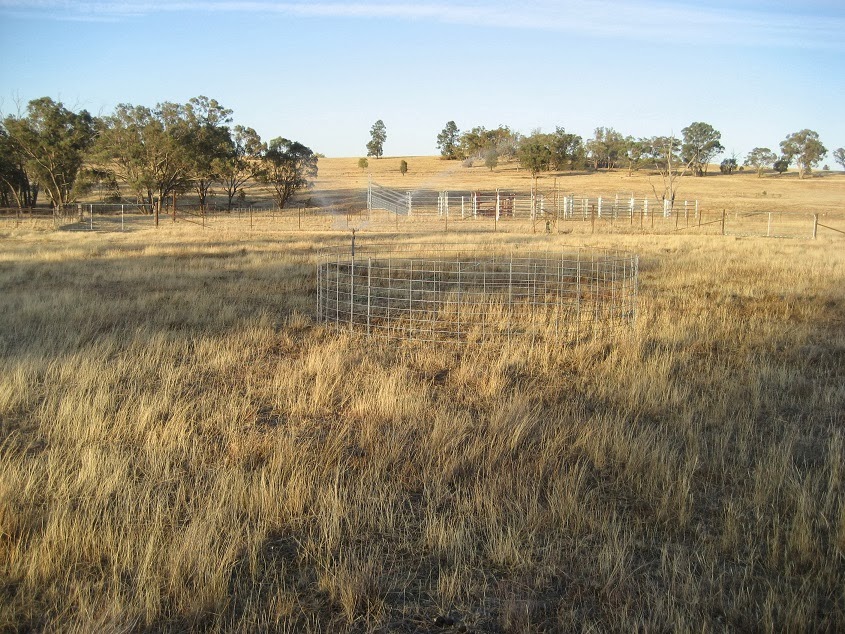 At a tad after 7.30 pm on Saturday 4 January 2014 we turned the water supply to the sprinkler on. There was a brisk breeze blowing which meant that the water spray up wind was not nearly as far as it was downwind. The sprinkler worked extremely well.

After 20 minutes when in theory about 1,000 litres of water had been dispersed the top of the soil under the sprinkler was damp but our impression was that it would not be sufficient to get much growth happening. Consequently we decided to run the sprinkler for a full hour, making 3,000 litres dispersed. The soil surface was very damp (but no mud).

Watering close to sunset should mean we reduce the evaporation from the site, or certainly in comparison to what might occur if we did the watering during the middle of the day.

Area Watered
Once the watering was complete we were then able to calculate the total area watered. We simply walked across the wet area from drip-line to drip line twice at perpendicular angles. From this we estimated that the diameter of the wet area was 22 metres or slightly more than the length of a standard cricket pitch. Using a web-based calculator (http://www.calculateme.com/cArea/AreaOfCircle.htm) the approximate area watered was 380 square metres or 3.8 % of a hectare.

3,000 litres of water spread evenly over 380 square metres equates to roughly 8 mm water falling per square metre (sought-of comparable to 8 mm rainfall). Using the generally accepted guide that every mm rainfall produces 10 mm soil profile moisture this means that roughly 8 cm of soil profile moisture would have been created. Most of the ‘action’ in the soil happens in the top 4 inches or 100 mm, so we are pretty happy with our first watering. Using the foregoing it means that we will be applying roughly 1 mm water over the area each 7.5 minutes.

Second Watering
On 5th January 2014 we again watered the area for one hour. Our intent is to repeat this at around the same time each day for at least 2 weeks regardless of any natural rainfall.

Moisture Profile Check
At 4.00 pm on Monday 6th January 2014 we dug into the soil within the drip line to see what the moisture penetration was so far. The top 100 mm was damp, and dry below this depth. Daily watering for one hour should be sufficient to stimulate plant growth. One point to note: the temperature on 4th through 6th January 2014 has not been extreme but the wind has been strong.

Cost of the Experiment
The total cost of the materials used in the experiment is around $100. Daily water cost will be about $1.50.

Reporting Outcomes
We will make periodic posts showing any material change on the site.
Posted by Phillip Diprose at 5:18 pm

For both watering events on 4th and 5th January there was a stiff SW breeze. Watering 6th January ... strong southerly wind.

7th January 2014: Stock water pump ran for 1.25 hours in the morning to fill tank on top of the farm. Given the pump capacity is 5,000 litres per hour and after allowing for stock water consumption this suggests that estimated flow rate from the sprinkler at 3,000 litres per hour is close to the mark. Water scheme tank filling also kicked in, with 11 kl received during the day taking gauge reading to 960 kl.
During the evening water of the site there was a light southerly breeze, which meant that the drip line was pretty even (circular).
8th January: Noticed some slight growth from a few perennial plants within the drip line. Evening watering was with stiff northerly breeze blowing.

9th January 2014: 9 mm rainfall received on the farm (and site) from 6.30 am to about 3 pm. The site was not separately watered given the rainfall. Soil surface at the site was almost wet V damp in other parts of the paddock. A further 7 kl water was received into the water scheme tank during the day with meter reading finishing at 967 kl.

13th January 2014. 40 degree day. Watered from 8-9.00 pm. All stock are currently in paddocks that are watered exclusively from the bore water scheme. No to minimal breeze. Some Warrego Grass seed broadcast in the stock exclusion area and part of the remainder of the site. Sheep starting to graze 'green pick' emerging on the site.
14th January 2014. 40 degree day. Rhino tank filled during the course of the day. Reading at dusk was 981 kl. Watered from 7.40-8.40 pm. No breeze evident.